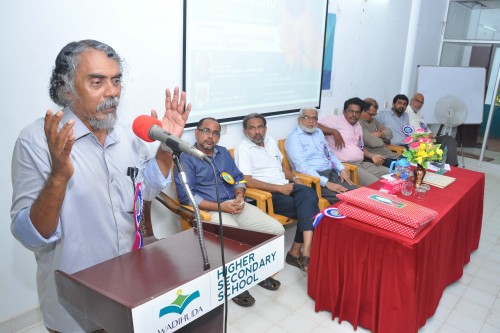 "SEMINAR AGAINST INCREASING INTOLARENCE IN INDIA

A seminar on “Increasing intolerance and apathetic government’’ was conducted at Wadihuda, Pazhayangadi, Kannur on 28th November 2015, Saturday morning at 10 AM.

The seminar was organised by Ta’aleemul Islam Trust based on one of the most relevant on the topic in our socio-cultural demography. Prof: K.E.N Kunhahammed, the well-known orator, thinker, and eminent writer in his keynote masterfully exposed those root causes and fringe elements which destroy the essence of India which is its cultural diversity, by means of intolerance. Though intolerance existed in its primitive form, what is disturbing in the current scenario is the way in which the government itself promotes the intolerance. The primary examples of this religious and cultural intolerance range from the murder of the father of our nation, demolition of Babar-e-masjid, and recent cold-blooded murder of Kalburgi and Muhammad Akhlaq.

Mr. V.K Hamzah Abbas, the chief editor, Gulf Madhyamam and the Chairman of Ta’aleemul Islam Trust in his inaugural speech referred this fascism as a fatal disease which destroyed the virtues of the previous generations. He elaborated that the fascism functions by destroying the self-esteem of people and thus removing their ability to respond. The citing about the history of the Pharaoh of Egypt and worshipping of a golden calf in holy Quran are the clearest indication of the modus operandi of fascism. Eminent personalities like T.P.Mohammed shameem and P.K Suresh Kumar also addressed the gathering. Vice chairman of Ta’aleemul Islam Trust S.A.P Abdussalam presided over the seminar. Farook Usman welcomed the gathering and vote of thanks was given by P.K.Muhammed Sajid.